skip to main | skip to sidebar

Support the inhabitants of Travno 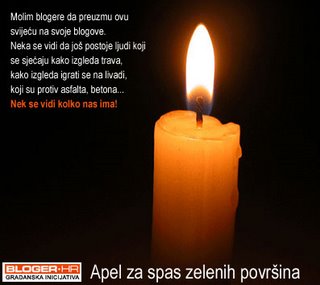 This post is a bit different from previous ones. This one is about a specific political issue and the arrogant attitude of the Catholic church towards inhabitants of Travno. Travno is a part of Zagreb, the capital of Croatia. There is a big residential building (largest in Croatia) inhabited by around 5000 people. The building has a large green park by its side, as you can see from the pictures on the link. The large picture on the frontpage says "Light the candle - here is where the democracy is dying".

Namely, the church insists on building the church in the middle of the park where many children play (thus, destroying about 1/3 of its area) despite the protests (one was held yesterday) of the Travno inhabitants, despite the fact that there is available "non-grass" space at the same distance, and despite the critique of many architects. Neither the politicians nor the church listen to their suggestions. They are are accused of being "anti-christians" and the leader of the inhabitants has even been threatened by death a few months before.

The inhabitants are not against the church building itself, they just don't want it to be in the middle of the park. And with so many large concrete buildings, this residential block needs the park. And very near there is available space for the church. However, neither the church nor the Zagreb's town council, currently lead by Milan Bandic (BTW, he has been caught for driving while being drunk), will listen to the will of the people. The democracy is truly dying in Travno. That park is really beautiful and I hope that politicians will at last start hearing the will of the people they are supposed to serve.

For those who understand croatian, this is the link to the news article.

Please help spread the word about this! The picture above is in support of inhabitants of Travno. Many bloggers have also organized themselves in support of the Travno inhabitants. The text on the picture says: "I plead bloggers to take this candle to their blogs. Let the world see that there still exist people who remember how does the grass look like, how does it feel to play on the lawn, who are against asphalt and concrete.. Let the world see how many of us there are!" At the bottom is "Action to save green surfaces", and in the bottom-left corner "Citizens' initiative".

I was writing a program and wanted to measure both its execution time and used memory. For time measurement, getrusage(3) works just fine. However, it returned 0 for memory usage. A quote from the man page:
"The above struct was taken from BSD 4.3 Reno. Not all fields are meaningful under Linux. Right now (Linux 2.4, 2.6) only the fields ru_utime, ru_stime, ru_minflt, ru_majflt, and ru_nswap are maintained."
(This refers to struct rusage, filled in by the getrusage() function.)

The question is why? At least some of memory statistics that should be returned by getrusage() can already be obtained through /proc/*/stat.

A simple question: can someone point me to free(-ish) trac+subversion hosting? I will set up a public project to start community development of BSD-licensed smart-card daemon in order to replace SCD that comes bundled with gnupg2.

As you might remember, many posts ago I have been criticizing Werner Koch's policy about refusing to include PKCS#11 support in scd. I've received enough mails from other users agreeing that his policy is not reasonable w.r.t. this feature.

I'm working on this project solely in my free time (which is not abundant as it is, and often gets spent on other things). I hope to draw in about 2-3 more developers interested in low-level crypto programming so that we can jointly finish the task in our free time. Reward? None, except for the joy of programming and later fame :) [OK, it can also be a good reference in the future when looking for a job, and might even draw in some commercial funding in the future.]

Recently I begun to work on a 64-bit machine with RHEL WS 4 installed. I was skeptical at first towards RH, but it turned out to be a nice experience. Installed packages (e.g. mysql, apache) have no automatic configuration at all. Defaults are reasonable. And they are not automatically put into all runlevels as in some other distributions. I don't have a feeling that I'm working "against" the system which I had with many other distributions.

The best part is how RedHat has become security-conscious. I already mentioned not enabling daemons by default after installation. Another is that the firewall is always active and passes through a select few ports. And there comes SELinux. The "targeted" policy that comes with RedHat is almost invisible; it contains few vulnerable daemons and lets other users do their work as usual. I noticed that SELinux is active because mysqld mysteriously reported EACCESS on its datadir, even though all permissions were correct and the directory was accessible when I made su to the mysql user. I moved the data directory from its default place /var/lib/mysql to /home/mysql. The new directory wasn't marked in the policy as accessible to mysqld so I had to fiddle a bit to fix that.

All in all - go for RedHat!

Tags: linux redhat
Posted by zvrba at 21:49 No comments:

It's incredible how many web radios make it hard to listen their program for users who don't have windows and don't want to mess with installing mplayer plugins into firefox or opera under linux. Take for example the Norwegian Radio 1 (something I "hacked" today). I had to manually wget several obscure pages (whose links I obtained by searching through the ugly HTML+javascript of the web interface) just in order to be able to execute the following command and listen to the radio: mplayer http://213.158.233.199:3004.

Why can't they simply publish the URL on the website? My guess is that there are two reasons for that:

zvrba
A random guy with a PhD in computer science writing random thoughts on this blog only to be read by random people browsing the net.